Taking Hoarding To Task: The Role of Hoarding Task Forces in the Community 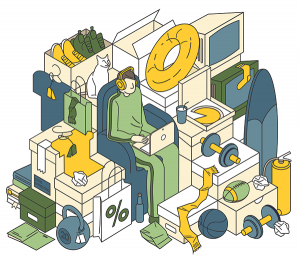 Compulsive hoarding seems to be everywhere.  Turn on the television, and there’s bound to be a program related to hoarding, organizing, or decluttering.  While some may argue that hoarding is a “trendy” diagnosis and the prevalence of hoarding issues is greatly inflated to create entertaining television, the fact remains that hoarding is a serious mental health issue strongly associated with both anxiety and depression.  Reality television may bring new attention to this problem, but even without the cameras rolling, hoarding would still be a debilitating condition that has a far-reaching impact on individuals and communities across the country.  With an estimated prevalence of 2.6 cases out of every 100 individuals, chances are that someone struggling with hoarding issues lives right in your neighborhood!

Is there more hoarding going on in our society or are we just more aware of it?  The answer is a mixture of the two.  There have been documented cases of hoarding behaviors going back over the past centuries.  One of the most famous cases is that of the Collyer brothers, who made news in 1947 when they were found dead amidst over 140 tons of material in their Manhattan brownstone.  While there has always been a history of hoarding, there does seem to be an increase over recent years.  Before the 1960s, there were no self-storage facilities.  Now, there are over 2.3 billion square feet of self storage space, as estimated by the Self Storage Association – amounting to more than seven square feet for every American!  This seems to reflect an increase in acquisition on a societal level.  Not only is it easier to acquire, but it’s easier to hold onto these possessions.

As hoarding has a growing impact on local communities, there has been a concerted effort to provide effective services and interventions that address the needs of both the individual and the community at large.  Previous efforts included “forced clean-outs” where material was removed from the premise despite the individual’s objections.  These isolated interventions may have brought the property to the community standards, but were little more than superficial quick-fixes.  The clutter was bound to return as these types of interventions did not address the underlying issues that led to the accumulation of clutter.  Additionally, these types of actions tended to be of a confrontational nature and resulted in individuals distrusting agency services and declining supports that could greatly benefit them.  According to the Montgomery County Task Force on Hoarding Behavior Report, a single “forced clean-out” of a hoarding environment can cost as much as $25,000 – not taking into consideration the emotional cost for the individual, family, and community.

Given the large expense and limited efficacy, many governments have come to the realization that, to effectively address hoarding issues in the community, there needs to be a different approach – from conceptualization to implementation.  These endeavors have taken place across the country, implementing an organized effort and involving numerous different agencies – taking form as Hoarding Task Forces around the country.  So what exactly is a hoarding task force?

The International Exchange on Hoarding defines a hoarding task force as a collaborative workgroup or alliance that is comprised of a variety of service providers.  These are not-for-profit entities that focus on coordinating managed responses to hoarding situations that reach the public’s attention (“public” often meaning government agencies).  Additionally, the hoarding task forces provide community outreach, education about hoarding, and training for service providers.  The first known hoarding task force in the United States was started in 1998 in Fairfax County, Virginia.  Since then, there are over 80 task forces, ranging from cities and municipalities to counties and states.

A hoarding task force is often commissioned by a government body.  The Gaithersburg Hoarding Task Force (GHTF) in Gaithersburg, Maryland was initiated in 2008 by the city’s Community Services after facing multiple challenges in working with hoarders in the community.  Also in Maryland, the Montgomery County’s Task Force on Hoarding Behavior most recently started in 2009 under the initiative of the Department of Health and Human Services (DHHS) as it was recognized that there were individuals repeatedly working through the system in an attempt to get services for hoarding-related issues.  While the specific wording may vary, each hoarding task force seems to have adopted a similar mission or focus: to coordinate a multifaceted team so that, when faced with hoarding situations, is able to balance the individual’s rights with the safety of the community (as modified from the Fairfax County annual report).

Once the decision has been made to establish a hoarding task force, the next step is to determine who will constitute the membership of this team.  Many hoarding task forces have a “two-pronged” approach, representing the legal and mental health elements.  The legal “prong” may be comprised of court representatives, police, animal control, fire and safety, community affairs, and code enforcement.  The mental health “prong” could be represented by adult and child protective services, health and human services, crisis services, and other therapeutic programs.  Additional members who do not fit neatly into either of those categories include service providers and volunteer coordinators.

Smaller jurisdictions may emphasize the management of specific cases as they are brought to the task force’s attention.  With Gaithersburg’s hoarding task force, there are monthly meetings during which a select number of hoarding cases is discussed.  During these “staffings,” funds may be allocated for clean-up services, referrals for therapeutic services are identified, and possible conflicts between the individual and other involved parties are addressed.  Each month, there is an update as to the progress made with each individual’s situation.

Larger jurisdictions may focus on the coordination of agencies, working to facilitate communication and interventions so that individuals struggling with hoarding are less likely to “fall through the cracks” and not receive the needed services.  Montgomery County’s hoarding task force emphasized the collaboration between multiple agencies, clarifying the role that each agency would play and how these agencies could speak with one another while respecting the rights and privacy of the individual.  In this vein, Montgomery County trained representatives from each program and agency about what hoarding is and how to address it, focusing on the specific strengths of each program.  A “chain of events” was mapped out so that there was a clear guideline of how different service programs would get involved with a hoarding-related case.  Given the high rate of recidivism of hoarding cases in general, the Montgomery County hoarding task force looked to develop an approach which, by drawing on services already established in the area, was better able to provide more effective first-line interventions and to interrupt the cycling through the system in which many hoarders get caught.

Many people fear that hoarding task forces are punitive, that stormtroopers will kick in their doors and haul away all their belongings.  One gentleman who struggled with hoarding behaviors called his area hoarding task force in an effort to identify services that could assist him.  When asked the question “Who do you want to report?” he said he wasn’t interested in reporting anyone but wanted to learn more about available services.  After being repeatedly told that he had to be calling to report someone, the gentleman became so fearful of being found-out or punished that he simply hung-up.  In reality, had the gentleman remained on the line, chances are he would have been connected with various therapeutic and clean-up services available in his community.

Interacting with the local hoarding task force needn’t be an anxiety-provoking ordeal.  The purpose of each task force is to facilitate access to support and services, for individuals, their families, and the community at large.  The ways in which task forces go about providing this access can be as varied as the number of task forces themselves.