OCD is comprised of two definitive elements: recurrent obsessions and compulsions. Individuals with OCD devote a significant amount of time and effort to the attempt to manage and cope with symptom intrusion. Doing so can be overwhelming, particularly as symptoms intensify, which can lead to substantial impairment and distress.

Obsessions are defined as recurrent intrusive thoughts, including mental images or impulses to engage in a particular behavior. An individual may experience obsessions with an unanticipated level of intensity, contributing to the distress associated with the disorder. Despite identifying obsessions as senseless or inappropriate, individuals with OCD often feel powerless to control the continual influx of overwhelming obsessive thoughts. Common obsessions include: 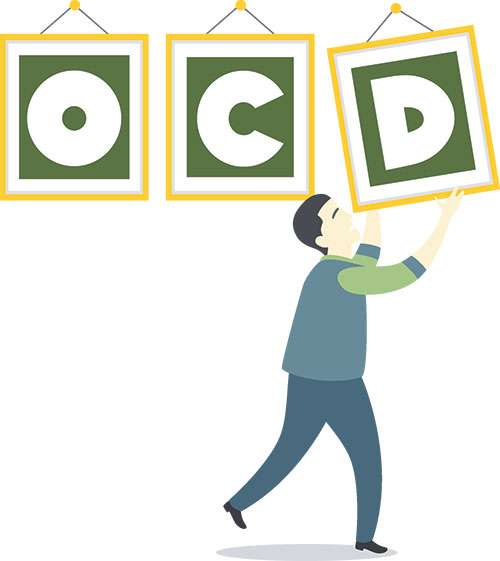 Compulsions are repetitive physical or mental behaviors in which the individual feels driven to engage, in order to neutralize an obsession or in accordance with rules that are applied rigidly. The purpose of these acts is to reduce distress or to prevent a dreaded outcome; however these compulsions are not really connected to the feared event or are distinctly excessive. Compulsive behavior can help foster a sense of control over obsessions and over the related emotional reactions. This relief is only temporary and actually can strengthen the influence of the obsessions. Common compulsions include:

A third element of OCD is the avoidance of situations that cause distress. Sometimes compulsions are so elaborate and demanding, it can be easier to steer clear of those things that trigger the compulsions.

It is estimated that the lifetime prevalence rate for OCD is 2.5% – that’s almost 800,000 people in the United States who will experience OCD at some point in their lives.

For 80% of adults with OCD, their symptoms started in childhood or adolescence. The difference between adult and childhood OCD is developmental, with respect to the level of insight demonstrated. OCD may have a magical element for children because they do not have the cognitive skills that allow for the rational explanations often made by adults with OCD. Additionally, Piaget described the presence of some obsessive and compulsive behaviors as normative. Age-dependent obsessive-compulsive behaviors are relevant to the progression of cognitive development. Unlike the repetitive behaviors associated with cognitive development, OCD behaviors do not foster a sense of mastery and may actually interfere with the child’s ability to socialize and develop relationships with peers.

Individuals with OCD often recognize that these obsessions and compulsions are excessive or irrational but they feel the need to engage in them anyway. This tug-of-war between what makes sense and what is being demanded of them by OCD can further the distress experienced as a result of the OCD.