What is Cognitive Behavior Therapy (CBT)?

Why do people come to therapy? Often they’re experiencing some kind of emotional distress that they’d like to go away. Simply put, they feel bad and would like to feel good. However, the act of talking about the uncomfortable feelings usually is insufficient to create lasting and meaningful change.  With behavior therapy, there is the realization that human beings are very similar to other animals. Just as Pavlov’s dogs learned to salivate in response to a bell, perhaps people could learn to act differently and that would lead to their feeling better about themselves and their situation.  Humans, however, are a bit more sophisticated and advanced than other animals (or at least we’d like to think so). With all the extra brainpower that people have, surely there are ways to think differently about the situation. Wouldn’t this then have an impact on how people feel about themselves or what’s going on in their lives?

This is Cognitive Behavior Therapy (CBT) – examining and addressing the interactions of thoughts, feelings, and behaviors that are playing out in a person’s life. By looking at the relationship between these three factors and how they interact with one another, it is possible to find ways to disrupt the established patterns and create positive change in one’s life.

Often, the flow with which people are most familiar is: 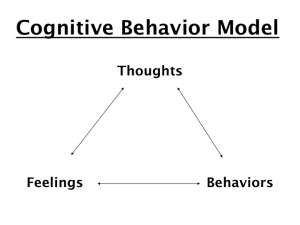 Consider a non-therapeutic example of this flow: Imagine a high school student who has a math test at school. That morning, the student may awaken and think “Oh no, I’m going to fail my test! I didn’t study enough. My parents are going to ground me when they see I’ve failed. Maybe I’ll even have to go to summer school!” This leads to feelings of anxiety, guilt, and dread, just to name a few. So what might the student do? “Cough! Cough! Mom, I don’t feel so well. Maybe if I just stay in bed. When I feel better, I’ll get up and go to school.” This may have worked for some, but my mother was a nurse and didn’t fall for this at all. Her response? “Get up out of bed, take your shower, and have some breakfast. Once you get moving, you’ll feel better and you’ll realize that things aren’t as bad as they seem. You may not get an A on your test but you probably won’t fail it either.” Little did she know, she was using the cognitive behavioral model.

This same model applies to many mental health issues including anxiety disorders and depression. In CBT the goal is to make small, systematic, progressive changes in each area – thoughts, feelings, and behaviors. Making a change in one can have a rippling effect and result in changes across all three areas. With thoughts, the goals include improving decision-making and cognitive restructuring. Cognitive restructuring involves identifying and challenging inaccurate, distorted thoughts and then replacing them with more adaptive, rational ones. For feelings, CBT focuses on being better able to tolerate emotional discomfort. Behaviors are addressed through the intentional and gradual exposure to those activates which have been avoided – letting go of items, resisting bringing new items into the space, and organizing those items being kept. Consistent, sustained efforts are important when it comes to challenging and changing these hoarding-related thoughts, feelings, and behaviors. This isn’t an easy process. If it were easy, everyone would do it and there would be no need for therapists!