Procrastination and the Search for Motivation 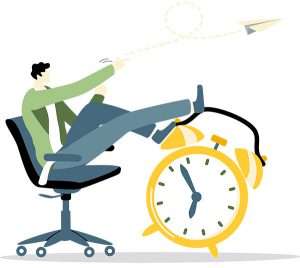 Who hasn’t hit the snooze button?  Waited to return a phone call?  Started writing a paper at the last minute, perhaps the night before it’s due?  Everyone’s guilty of procrastination at one point or another, but when does it become problematic?  What do you do when it interferes with meeting responsibilities or attending to life’s demand?

“I’ll do it in five minutes…”  Procrastination is the delaying of a task to the point of experiencing subjective discomfort – knowing that the task needs to be done but still not getting started on it.  Despite putting off the unpleasant tasks, the distress still tends to loom as, sooner or later, the project will resurface and ask to be attended to.  Even with the best intention of completing the task (later) it is not uncommon for things to be delayed throughout the day and then not completed because of running out of time.

“I’ll do it after I’m done playing this game…” Who wouldn’t choose a pleasurable activity over a chore?  Rather than experience the discomfort of the task at hand, procrastinators will look to feel good in the moment (not doing the task). To help with finishing the chore, have the reward come afterward. Otherwise you’re applying backwards conditioning, which doesn’t work.  It’s like having dessert before eating your vegetables – can you really be surprised when there’s no room for the vegetables?  But, surprisingly, if the veggies are eaten first, there’s usually still room for the dessert.  It’s important to plan enough fun and relaxation time into your schedule, just not at the expense of those chores.

“Am I just lazy or unmotivated?”  Not necessarily. While procrastinators may be viewed as lacking self-discipline, they really struggle with planning, organizing, and delaying gratification.  People who severely procrastinate have a difficulty structuring their environment and staying focused on the task at hand. Being impulsive, a procrastinator is more likely to make choices based on the experiences in the moment rather than to look ahead to the future and the possible outcomes.  (Yes, there is a strong element of executive functioning deficits as is also seen in Attention Deficit Disorder.)

“It could have been a lot worse…”  There’s a pattern in how chronic procrastinators tend to view their circumstances. They routinely avoid acknowledging what might have been had they acted in a timely manner (“Had I started working on my paper earlier, I would have handed it in on time and gotten full credit.”).  Instead, the thoughts attend more to feeling better in the moment (“If I’d had more time, I would have done better.  But at least I handed my paper in.  A low grade is better than no grade.”). As a result, the procrastinator doesn’t reflect on possible corrective actions. By putting immediate relief of distress ahead of the long-term consequences that result from this procrastinating behavior, the individual escapes the unpleasant state rather than learning how to deal with stressors.  This maintains the procrastinating behaviors because there’s no motivation to change these behaviors.

“I can’t decide…”  Part of procrastination can be perfectionism. This combination of perfectionism and procrastination can paralyze a person.  The perfectionist worries over possible mistakes.  These doubts feed into indecision and the procrastination of taking action.  The greater the worry, the slower the decision-making process, the longer it takes to begin an activity. This is especially strong in uncertain situations, because there are more “but what if…” possibilities to think about.  By worrying about possibilities, the procrastinator postpones taking action and finding out if these worries could actually become a reality.  The irony of the situation is that the outcome of action is often easier to deal with than the anticipatory worry itself!

“Let me do just one more thing…” Often, procrastinators don’t accurately estimate the amount of time needed to complete activities. Most commonly, they underestimate the amount of time an activity will take.  It may take twenty minutes to drive somewhere, but does that include the time it takes to park the car and get in the building?  What about actually getting things together and leaving out the door?  Is there really time to check e-mail or throw in a load of laundry?  By having a clearer estimate of the time needed to complete a task (or travel to a location), it is possible to better prioritize the tasks at hand.

“If only I had more time…”  In some ways, procrastination can serve to protect an individual’s self-esteem.  If a task isn’t completed or isn’t perfect, it isn’t for lack of effort or ability on the procrastinator’s part.  Perhaps as part of the time management difficulties, procrastinators tend to spend excessive amounts of time on some tasks and hardly any time on others.  They may be diligent and hard-working, but the allocation of time and efforts is unbalanced and inefficient.  However, even if the procrastinator had more time, it still wouldn’t be enough to attain the level of perfection that is aimed for.  It simply isn’t possible for the individual to create a finished product that is “good enough.”

“But my treatment isn’t for procrastination…”  While people may not seek out for treatment for procrastination, it’s not uncommon for procrastination to be addressed as a therapeutic issue in the course of treatment.  Individuals with OCD may avoid engaging in specific activities so as to avoid distressing rituals.  Clients may procrastinate doing their homework – it’s not uncommon to avoid engaging in E/RP because of the anticipated anxiety associated with not ritualizing.  There may not be follow-up on discussed activities because of “not getting around to it.”  Looking for the “right” answer, one may deliberate and deliberate, feeling more comfortable to further research options than make a decision and risk making the wrong decision.

“Are you going to motivate me?”  A therapist’s role in is to help the individual better manage the failures (actual and potential) associated with the procrastinating behaviors.  Focusing on the management of negative emotions means that the individual can be more effective when approaching the difficult, frustrating situations that result from procrastination.  Treatment can build one’s ability to cope with difficult, frustrating situations and to resist temptation to postpone confrontation or to give-up on endeavors.

Some strategies to help reduce procrastination:

Tasks with purpose.  When looking at the task at hand, is there a positive reason for engaging in it?  E/RP may be associated with discomfort in the moment, but is also related to reduced levels of anxiety on a larger scale.  Practice reframing the task to emphasize the gains and identify rewards.

Structuring time. Structure helps to reduce uncertainty and increase a sense of purpose.  Improving time management behaviors can help the impulsive individual better focus and prioritize activities, increasing the likelihood of getting to obligations in a timely manner.

Set concrete deadlines for the short-term.  When deadlines are further out, people are more likely to procrastinate – there’s more wiggle room in the calendar and the due date can feel more abstract.  Create specific deadlines and work toward them.

Set a timer to help keep track.  “I’ll get started in five more minute” can easily turn into two hours if you lose track of time.  Setting a timer helps reinforce the commitment to starting the task.  Find a buzzer that won’t turn off on its own, so you physically move to quiet it, thus allowing you to transition to the task at hand.

Be accountable to someone.  One of the best motivators is knowing that someone will be asking about your progress.  Be vocal about your goal and your plans for reaching it.

One step at a time.  When approaching a larger project that can be difficult to get a hold of, consider compartmentalizing.  Break it down into smaller pieces that can be handled one at a time.  The decisions are not as overwhelming.  Focus can be easier to maintain for briefer periods of time.  Each “bite” is more manageable and can be pieced together to complete the larger project.