OCD is a Labrador

I use analogies and humor to convey concepts in session.  From experiences with clients, I’ve found that this approach helps individuals adopt a different perspective to understanding their experiences and how they can challenge their anxieties.  This is not to diminish the pain and suffering people experience with OCD.

***END DISCLAIMER (with a little bit of self-reassurance)***

OCD can be viewed as a Labrador, an annoyingly persistent animal.  Ginny, my yellow Lab, is the embodiment of OCD in many ways.  Hear me out.  When she was recovering from surgery and I needed to keep her movements restricted, I would lure her down to my office with a treat.  Every time she came downstairs with me, she received half a rice cake (yes, that’s her treat).  Ginny and I established this pattern and it served a purpose at that time.  Consider this to be a behavior that is functional and situationally appropriate.

I begin with this because it is helpful to conceptualize behaviors on a continuum from functional to dysfunctional.  For example, checking the table for any belongings before leaving the restaurant can be considered suited for the given circumstance.  However, checking multiple times, returning to check again, or asking others to confirm the thoroughness of the checking would be excessive, disruptive, and tied in with feelings of distress or discomfort. 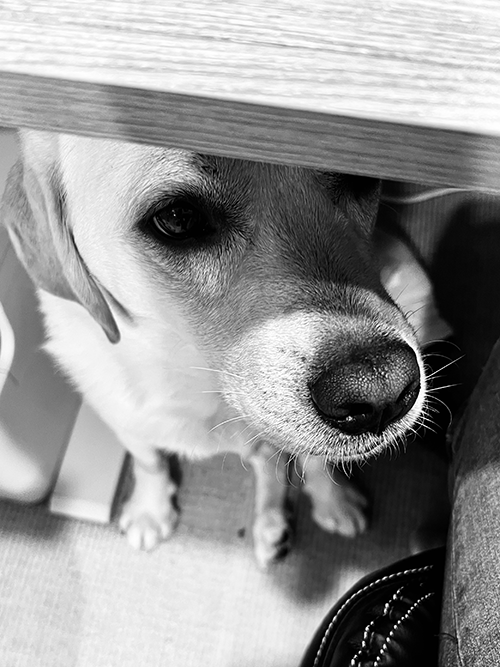 This excessive, persistent, demanding, intrusive nature could be seen in Ginny’s behavior now that she’s fully healed and insistent that she MUST follow me downstairs.  I don’t even have to come into my office.  As soon as the door to the basement opens, she’s at my side and following me down the stairs.  Ginny sits at the door and pesters other family members to let her downstairs if I close the door.  She shadows me into my office and sits right next to my chair awaiting her treat.  This is the obsession, the intrusive thought.  She looks at me with her big brown puppy eyes.  She paws at my leg.  She stares at the bag of rice cakes on the corner of my desk.  She nudges me with her nose.  She inserts herself into my space and demands attention.  This is the intrusive, obsessive thought coming into the mind.

Who am I to resist this puppy?  I know what she wants.  She only wants half a rice cake.  That’s not too much for me to do.  If I give it to her, she’ll go away.  Right?  I’ll just give her this little treat.  That’s the compulsion.  It’s easier to give Ginny her treat than it is to deny her, to endure her pesky prodding, and to have to look at those sad eyes.  I feel awful if I deny her this little thing, so I give in to her in the moment.  I’ve just engaged in the compulsion.

Every time I give her that treat, I’m reinforcing Ginny’s behavior of coming down to my office and expecting the treat.  I can break this pattern, but I recognize that I don’t want to go through the discomfort of doing so – enduring her pawing and prodding and begging.  The compulsion is just enough to quiet her intrusion for the moment, even though it will more or less guarantee that she continues to follow me to my office next time.

The key feature of OCD, making it a disorder, is that the obsessional thoughts and the compulsive responses are associated with an experience of distress.  They’re uncomfortable, painfully so, and intrude on day-to-day living.  Truth be told, Ginny’s coming to my office is not associated with any discomfort and I’m not bothered by her pursuit of a rice cake.  However, if this “rice cake habit” was unhealthy in some way, there would be a motivation to challenge it.  If Ginny’s vet expressed concern about her weight and wants to cut down on treats.  If her behaviors disrupted my sessions as she mauled me, demanding another rice cake.  If she insisted on progressively more treats to the point that she makes herself sick – she’s a Labrador, she’d eat the whole case of rice cakes in one sitting if I let her.  I would be VERY invested in cutting back the rice cakes if my giving her the treats meant there was the negative consequence of cleaning up dog vomit.

I like to use Ginny’s rice cake persistence as a model for explaining the method by which intrusive obsessional thoughts are reinforced by compulsions because most people can relate to a dog’s begging for a treat.  They can understand the power of “puppy dog eyes” and how difficult it is to resist giving just one more treat.  So, when Ginny arrives to our session and her face pokes up in the corner of the screen, I use it as an opportunity to discuss the ways in which we conceptualize OCD.  The intrusive thoughts can feel threatening, scary, and intimidating.  The compulsions are a way of protecting ourselves from an attack.  If we can think of OCD as more along the lines of a persistent dog who is highly food-motivated, perhaps we can retrain this OCD to stop intruding and demanding attention.